Mondays get such a bad rep. Everyone talks about how awful Mondays are:

“Ugh, Mondays are the worst.”
“If I just make it through this Monday, I’ll be fine.”
“I need some #MondayMotivation for such a horrible day.”

Whoa now! What did Monday ever do to you? Monday just wants you to love it and accept it and it wants to be helpful. If Monday could be manifested, it would be a not-yet-potty-trained puppy. It makes messes, but can’t stop wiggling its butt at you because it just wants you to love it SO MUCH. It doesn’t know what it’s done wrong and why you are mad at it, so it rolls over on it’s own mess. And here we are getting all frustrated and annoyed when Monday is just a puppy.

Now Tuesdays. Tuesdays are an entirely different matter. Tuesdays are conniving little snakes that slither in when you least expect them and MURDER YOU. Or at least murder your innocence.

Allow me to present a Hannecdote to explain:

Emily has enjoyed her weekend. She slept in and painted a little. She baked a pie and ate the whole thing. She feels rested after two days off from work and stress. Monday morning she is prepared for five more days of work until the weekend. Emily is bummed, but understands that this is a Monday occurrence and has prepared herself for a case-of-the-Mondays attitude. Surprisingly, the day goes by quickly, and Emily is very thankful for the weekend she had to renew her energy. She goes to bed Monday night, still thinking about her lovely weekend and looks forward to the next one.

Emily awakens Tuesday morning and finds that she hates the world. For no apparent reason other than it is a terrible day. She doesn’t quite understand, but during her day she can’t seem to get the energy she needs and counts the days till Saturday. 1, 2, 3, 4. Four whole days until Saturday. The energy she had gained over her weekend she had used up on Monday, preparing herself for the worst. Right under her own nose, Tuesday had weasled it’s way into her week. The weekend had JUST happened and she was already longing for the next one. She had been so innocent before, but now she knew the horrors a Tuesday could provide. She goes to bed annoyed at the lengthened distance between herself and her freedom.

Wednesday dawns, and Emily thinks to herself “It’s hump day! Half way through the week!” With this though in mind, the day passes quickly with the comfort that she’s made it half way. Thursday blooms with the promise of tomorrow being Friday, and Friday excites her with the simple fact that it’s Friday. She has made it to the weekend again! If only there hadn’t been that pesky Tuesday in the middle.

Do you see what I mean? Tuesday slithers its way into our week and surprises us with the awfulness. Even as I write this, I think of  Tuesday as a slimy, sneaky, greedy, selfish, evil, maniacal laughing snake. Its very nature is to contort and ruin and destroy. Evil evil Tuesdays.

And have you guessed yet? It’s Tuesday. I’m not a fan of Tuesdays.

BUT! I have found a solution that helps. My roommate Ri and I realized that we don’t get to spend as much time together as we would like. We have decided that every Tuesday night, when I’m home from work, and she’s home from student teaching, we 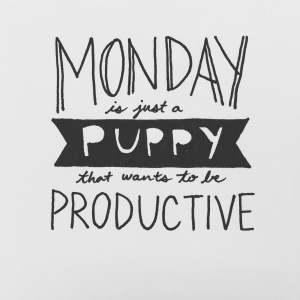 will do something. Last week we had no motivation so we just watched Netflix. This week we are going shopping because I don’t have nearly enough clothes in my closet or enough mugs in my cabinet. The point is, we spend time together on Tuesday nights. With that to look forward to, it makes my Tuesday a little bit better. If you can find something to do on Tuesday to help you look forward to the day rather than dread it, you’ll be beating the sneaky day instead of being sucker punched by it. If you have any other ideas that’ll help me get through Tuesday, I’ll gladly take any suggestions.

And remember! #BeNiceToMonday
She’s just a little puppy that wants to be productive.